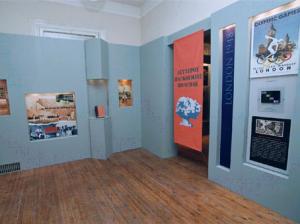 The exhibition “Greek Olympic Medalists” unfolds upon two main drifts. The first one concludes Greek Medalists of 1st, 2nd and 3rd place and the second presents the route of 100 years of Modern Olympic Games. An introductory union precedes, that refers to sports of Olympics in antiquity. Greek Medalists are environed by a brief film reference to the history of Olympic Games and to important moments of Greek and international championships according to the year they were held.

Testimonies and photographs with the same, for each Olympiad, order, compose a pattern, where victory and winner, the important sport moments of the Olympiads, the political occurrence and the historical moment attempt to revive realities in the memory of the older and to compose nuggets of history for the younger.